Adolf Hitler was never in the USA, but his books were brought there after the war. 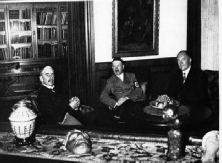 After the war 80 of the books that were in the bunker of Adolf Hitler were brought to this library.

1200 of Hitler’s books from München, Berlin and the Obersalzberg were taken to the Library of Congress in Washington.