The trip Hitler did on the 30th of June started at the FHQ Tannenberg. Hitler was driven through the German city of Kehl, on the other side of the Rhine from Strasbourg. In Kel they crossed the river Rhine 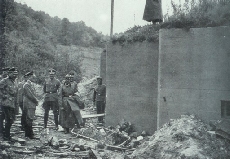 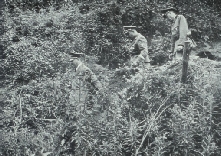 Location: Unknown, but the pictures below could have been taken near Kehl or Breisach. If so, the bunkers were on the German side of the Rhine.

Today: There are still some bumkers left in the area.

Heinrich Hoffmann’s book Hitler im Westen has some pictures of Hitler visiting German and French bunkers. This could have taken place during the trip on June 30. The picture on the left shows Bormann, who was with Hitler on that day. The book only tells that they visited German bunkers that had been under French fire.

On June 28 Hitler had left FHQ Wolfsschlucht by plane to go the FHQ Tannenberg. On June 30 another trip was planned. This time through Germany and France, in the Elsace (Elzas). 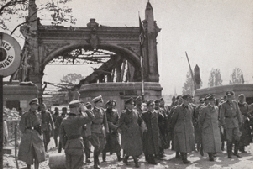 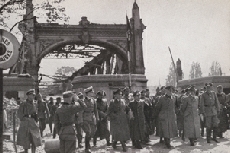 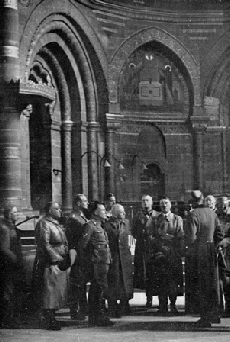 The trip continued through Sélestat and Colmar. If the cars stopped, and if so,where, is unknown.

Both pictures: Near the Rhine near Breisach. Keitel and Bormann are with Hitler.

Location: Unknown, it seems like the area has changed a lot.

Hitler saw some French bunkers on the westbank of the Rhine.

Floating bridge over the Rhine (8)

Location: Right across the Münster of Breisach (Münsterbergstrasse)

Today: The view is still the same.

To get across the Rhine Hitler and his company had to use a floating bridge.

The cars crossing the Rhine near Breisach 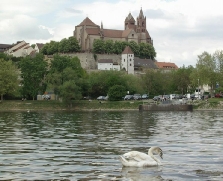 About the same location today

The trip ended back at the FHQ Tannenberg. Hitler was driven through the German cities of Waldkirch and Wolfach to get there.