Left: The Germans in front of the memorial stone

Right: The stone has been replaced by a new one. 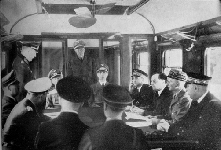 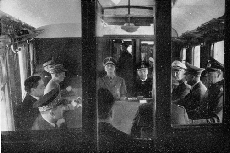 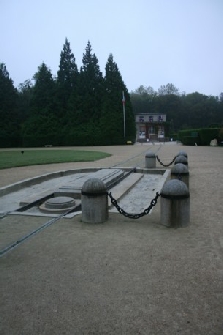 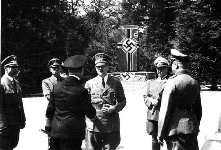 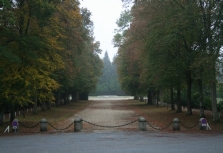 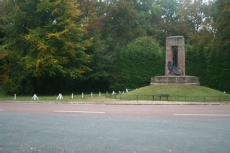 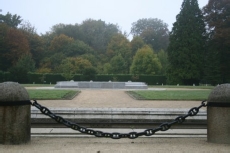 Left: Hitler walks towards the wagon 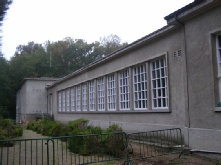 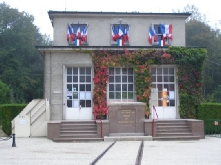 A replica of the French wagon is inside this building. Below: the same building from the side
(pictures: the Hitlerpages, 2009) 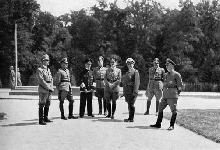 The monument behind the Führer was covered with the German flag. (central picture: Heinrich Hoffmann, 1940) The reason why is obvious when you look at the picture on the left: the monument shows a dead bird, symbolising Germany. (picture: the Hitlerpages, 2009) On the right: Almost the same picture today. It seems like the location of the pillars with the chains on them has changed to make room for the road. (picture: the Hitlerpages, 2009) 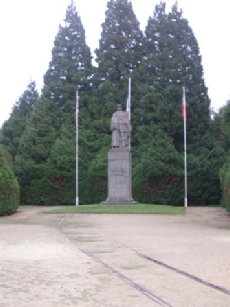 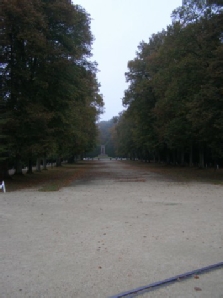 The statue of Foch is the only thing at this memorial that is completely original.
(picture: the Hitlerpages, 2009)

The path towards the statue of the fallen bird
(picture: the Hitlerpages, 2009) 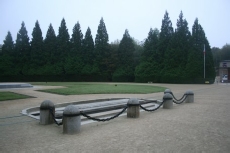 On November 11, 1918 German generals surrendered in Compiègne in the railroad car of the French marshal Foch. The site was turned into a memorial park with an avenue of 250 yards and a granite block on the spot were the train wagons had been. On June 21, 1940 the French signed to surrender to the German at the exact same spot and in the same railroad car, in the presence of Adolf Hitler. The park was destroyed during the war, but it has been rebuilt. Only the statue of marshal Foch is original. The railroad car you can see here today is a reproduction. It is kept in a shed where the original wagon was kept. The original wagon was taken to Berlin in the war, where it was bombed.

1. Statue of the fallen German eagle

2. Path to the memorial

6. Shed where the French wagon stood 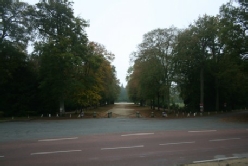 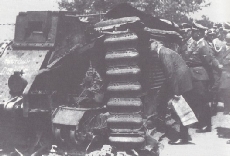 Hitler on the Rue de la Herse in Laon