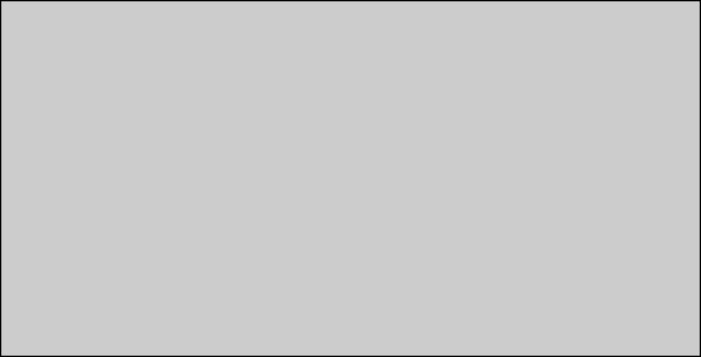 Hitler's regiment rests in Flandern. The regiment staff and the 1st and 2nd batallion go to Ardooie. The 3rd batallion goes to Koolskamp.

The regiment returns to Geluveld where gasattacks occur on daily basis.

The 1st batallion serves as reserve at Terhand (southeast of Beselaere).

The regiment staff spends the first night at a Bretterhüttchen, probably just a wooden shack.

After that the regiment staff goes to a Sanitätsunterstand at the Polygonwoods. (The post war Polygonwood Cemetery still is in that area).

The messengers, including Hitler, travelled between the front line at Hooge and the regiment building in the Polygon Woods.

The regiment also fights at the location of the ‘Nonneboschen’, woods that are on the other side of the highway from the Polygon Wood.

The French and British fought side by side in the third batlle of Ieper (July 31 - November 10), but the ambitious plans they had didn’t work out. They conquered the village of Langemark (Belgium), but they couldn’t capture the Geluveld (Belgium) area, where RIR 16 was stationed. 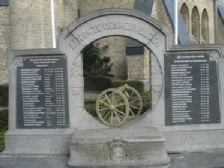 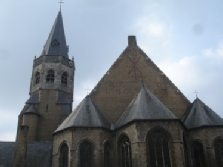 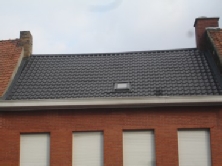 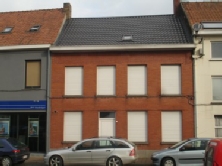 Replacement to Elsaze. The regiment leaves from Linselles and Tourcoing.

Locations batallions in the period after August 1/2:

Hitler receives a Military Service Cross Third Class with Swords, for having been wounded in combat.

Adolf Hitler and Ernst Schmidt are on a leave. They go sightseeing in Brussels, Köln, Leipzig and Dresden. After that Hitler goes to Berlin and Schmidt goes to Wurzbach. 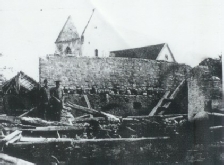 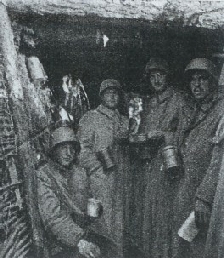 A picture of a so called Meldeläuferposte. Because Hitler delivered messages this could be a place where he has been. But where this post was or if he’s been here is unknown. 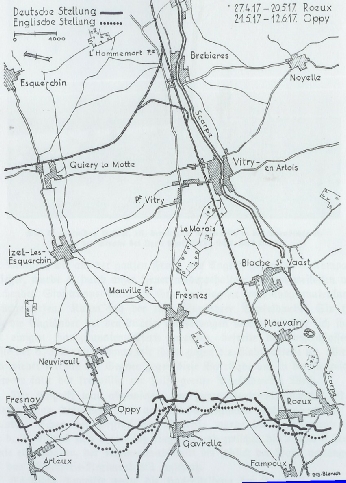 A windmill at St. Vaast

The road between Fresnes and Gavrelle in May 1917. The Germans transport English soldiers away from the front. (picture: Solleder, 1932)

Soldiers receiving decorations after the Battle of Arras in the village of  Lallaing (picture: Solleder, 1932)

Today: There’s still a station buidling in Roeux. It could even be the original one.

The regiment staf was located at the staion of Roeux. Hitler and Meyer brought messages from the station to the north and south wing of the regiment. There seem to be some remaining trenches in the area. British cemeteries are still there. 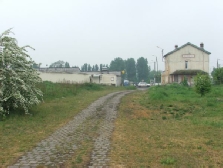 The station of Roeux is on the right side of this picture. (copyrights unknown) 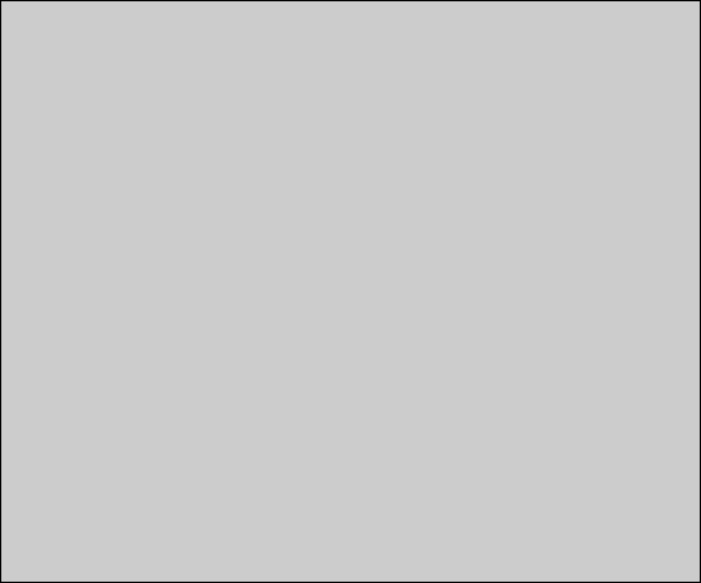 Hitler's regiment fights in the Battle of Arras, near Arras (France) and in the Arras-region Artois (France) from April 25 until May 19. The Battle of Arras was an offensive of British and Canadian troups on a front that was about 23 kilometers wide. The Canadian army took the Vimy Ridge. After the Great War a Canadian monument was built there. Hitler visited the monument in 1940. Hitler’s regiment stayed in the area of La Bassée until it was transported to Douai on April 25.

The regiment is replaced. It goes to Bauvin-Provin and then by train to Douai.

The regiment stands reserve at Douai.

The regiment is placed behind the ‘Motan 1 Stellung’, as reserve troops, at different, changing locations.

Hitler's regiment went to Corbehem for a rest. In the morning they went back to Douai.

May 3 - Klein (Petit) Vitry and Roeux

The regiment is located at Klein Vitry (near Vitry-en-Artois) and in Roeux near the front, the 1st batallion in the second line.

Replacement. The regiment goes to Doai to serve as reserve troops. On some ocassions they go to L’Homme (southwest of Douai).

The regiment replaces troops at the front. The first batallion is at the frontline, 1500 meters north of the railroad track between Vitry and Roeux. Shelter in Vitry-en-Artois, in a castle-like building. After WW1 only 5 buildings were still standing in the village, so the castle must be gone.

The troops of RIR 16 are south of Oppy in the trenches. The ‘Regimentsgefechtsstand’ is south of Izel (Izel-les-Equerchin) and later in Quiéry-la-Motte.On the leftflank near a windmill are the English troops.

After June 12 - Montigny and Pecquencourt

The regiment is replaced. It travels to Montigny and Pecquencourt. There it rests for ten days.

In 1917 Hitler’s regiment was in Vlaanderen and French-Vlaanderen and in the Oberelsass (Alsace). The end of 1916 and the beginning of 1917 Hitler spent in Germany, because he got woonded at Le Bargue. He joins his regiment again on March 5, 1917. In September and October 1917 Hitler is said to have been in Spital in Austria but that is not true. He went to Berlin to stay with the parents of a fellow soldier. After that Hitler joined his regiment in the south and north of Ailette. Hitler was also stationed in Ardooie (Belgium) for a while. 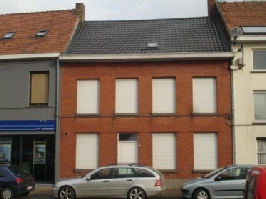 While Hitler was in Germany in the beginning of 1917, his regiment was located at:

1st and 3rd batallion go to Beauvin-Provin by train and by foot to Groß-Hantay.

Hitler returns to his regiment in this period.

Regiment commander at Abschnitt E, near La Bassee. The 2nd batallion is located at Groß Hantay. 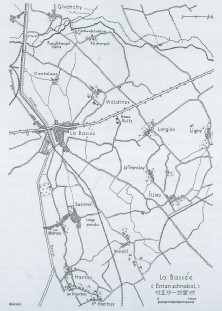 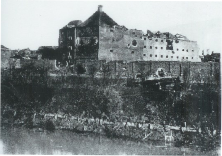 The brewery of La Bassee 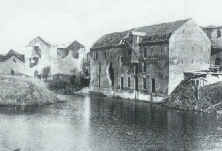 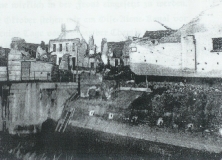 The channel near La Bassee

The channel near La Bassee

The station of La Bassee 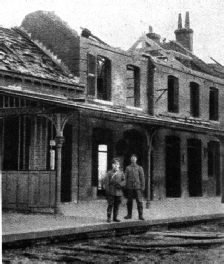 Another picture of the station of La Bassee, March 1917. Max Amann (a wartime friend of Hitler and the publisher of Mein Kampf) is the man on the left.

In the beginning of March Adolf Hitler returned to his regiment. It was resting by then near La Bassée at Hantay of Petit-Hantay. Hitler was in Hantay too in 1917.

On April 25 Hitler’s regiment was replaced. It marched to the station of Bauvin-Provin, near La Bassée. From there the regiment was transported to Douai by train. 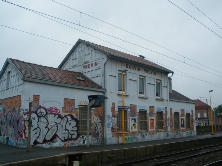 The station is still there.

Today: The old station was ruined in 1918. There’s a new station in Douai.

On April 25 Hitler’s regiment was replaced. It marched to the station of Bauvin-Provin, near La Bassée. From there the regiment was transported to Douai by train.

An old postcard of the station of Douai in 1900 (postcard: wikipedia) 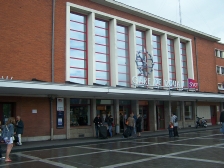 Location: Corbehem is southwest of Douai

On April 30 Hitler’s regiment went to Corbehem for a day. It returned to Douai on the same day. If Hitler was in Corbehem too, is unknown.

On May 3 Hitler’s regiment went to ‘Klein Vitry’ and Roeux. Where Hitler was, is not clear.

According to the regiment history Hitler’s regiment went to L’Homme every once in a while. If Hitler went there too, is not clear.

Location: After the war there were only five houses left in Vitry-en-Artois. The castle doesn’t seem to be there anymore.

On May 11/12 Hitler’s regiment went to Virty-en-Artois. There they found shelter in a castle-like building. The first batallion was at the front line, between Vitry and Roeux. 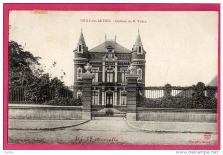 An old postcard of a ‘castle’ in Vitry-en-Artois. If this is the right one is unknown. (postcard)

Resting place for the regiment

On May 19 the regiment is pulled back from the battle. The soldiers are resting in Lallaing and Anhiers.

Soldiers receiving decorations after the Battle of Arras in the village of  Lallaing (picture: Solleder, 1932)

In the beginning of June the regiment is in the trenches south of Oppy. The regiment headquarters are south of Izel and later in Quiéry-la-Motte. Adolf Hitler was at those headquarters.

After June 12 Hitler’s regiment is replaced. It goes to Montigny and Pecquencourt. Where Hitler was, is unknown.

The front line on July 31, 1917. The Germans still seem to have occupied the Polygon Woods. The Nonnebosch is inbetween lines. (source: users.telenet.be/blindganger/derde_slag) 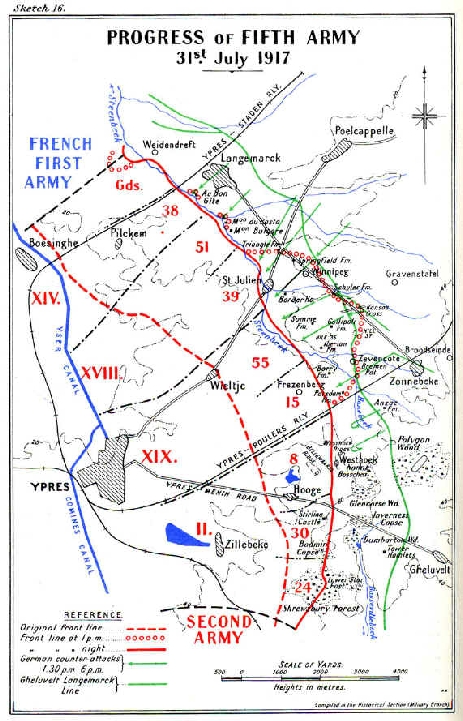 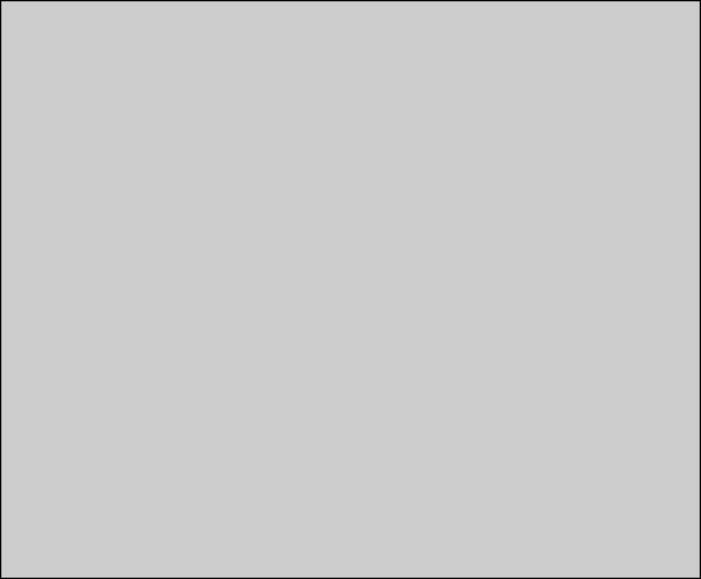 Hitler joins his regiment that’s in action at the Chemin des Dames, south and north of Ailette (a river north of the Aisne, France) on October 17 or 18.

The regiment goes to Rixheim to leave to the region of Champagne.

October 19 - March to the next location

The regiment goes to Molinchart. The Regiment Staf is located in a hole in the mountains of Montarcène and after that at the Plesnoy-Ferme.

The regiment goes to the trenches at Anizy and Lizy, they stay at the Barackenlager at Chateau Rocher (could be east of Anizy-le-Chateau).

November and December - Anizy and Lizy

The regiment is building defense lines.

The regiment takes over the ‘rightflank’ of the division: from the ‘Rudolfbrücke’ to 100 meters west of the ‘Lieschenbrücke’

Shelter at: Gercy, Houry, Prisces, Gronard and Burelles. Christmas 1917 was spent on a farm near Laon.

Location: Region between Soissons and Reims, just above the river Aisne

Hitler was stationed here in 1917. Hitler's WW2 Führerhauptquartier Wolfsschlucht 2 was in the same area, a litlle north of Soissons.

The regiment staff of Hitler’s regiment was located at a Kreidehöhle on the Gebirgsstock at Montarcène. Hitler was there too. A Kreidehöhle must be a hole in a mountain of pretty soft stone. The surroundings of Montarcène and Montbavin are full of this kind of holes inside the small mountains. The picture below was taken near Mons en Laonnois, near the Fort de Laniscourt.

This picture, showing an exemple of a small hole in the mountain, was not taken in Montarcène, but in the same region, near Mons en Laonnois.

Hitler's regiment was located in both Molinchart and Montbavin in 1917. The fortress near Laniscourt is in between those two places. As far as I know there´s no source that says that Hitler was here in 1917, but he visited the Fort de Laniscourt in June 1940. That must mean that he had memories of it from the First World War. Klick here to go to the June 1940 page for pictures of Hitler at the Fort de Laniscourt.

Today: There’s a new bridge there.

A drawingthat is said to be made by Adolf Hitler shows the blown up bridge near Anizy le Chateau. It’s hard to say if the drawing is really made by Adolf Hitler himself. There are a lot of Hitler drawings on the internet, but a lot of them are not really made by him. This drawing is dated 1916, but I haven’t found proof Hitler was in Anizy in 1916. He was there in 1917 and 1918. The drawing could be misdated.

This drawing that is said to be of Adolf Hitler shows the bridge near Anizy le Chateau.

A picture of the bridge in almost exactly the same perspective. The drawing and the picture are so much alike that it’s possible the drawing was made from the picture.

Hitler's regiment was located in both Molinchart and Montbavin in 1917. The fortress near Laniscourt is in between those two places. As far as I know there´s no source that says that Hitler was here in 1917, but he visited the Fort de Laniscourt in June 1940. That must mean that he had memories of it from the First World War. Klick here to go to the June 1940 page for pictures of Hitler at the Fort de Laniscourt.

Area of Anizy and Lizy

On October 25/26 Hitler’s regiment went to Anizy and Lizy, where the regiment went to the trenches. It is stationed at the Barackenlager at Chateau Rocher (could be east of Anizy-le-Chateau). In november and december the regiment is building defense lines in the area. On December 17 the regiment takes over the ‘rightflank’ of the division: from the ‘Rudolfbrücke’ to 100 meters west of the ‘Lieschenbrücke’.